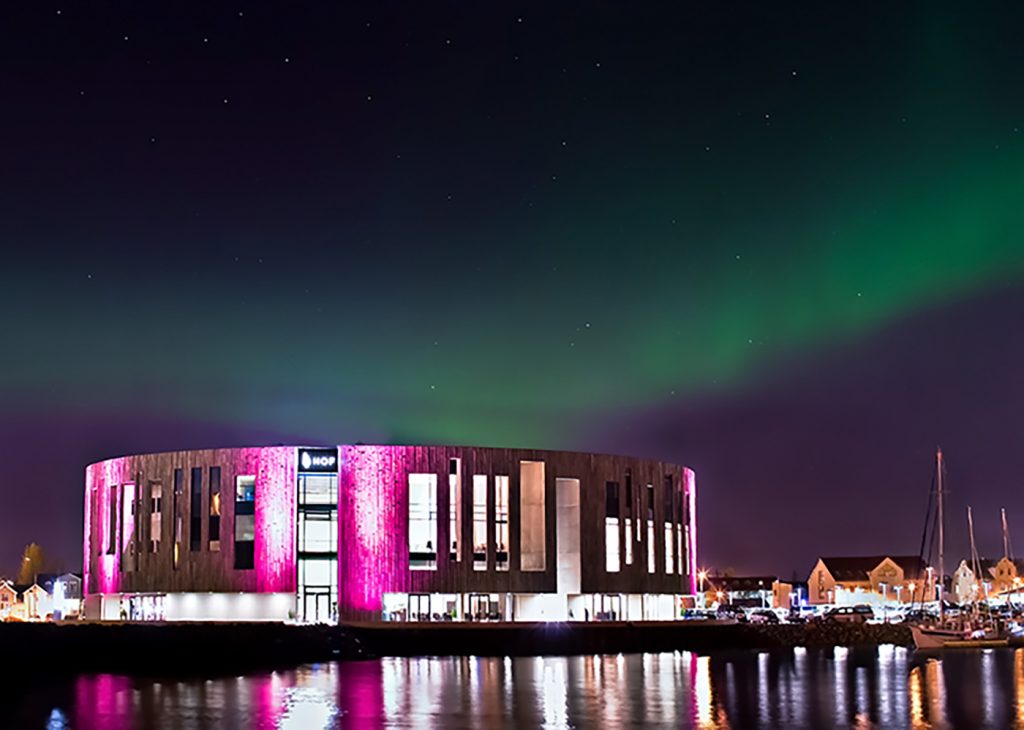 Fun for the whole family

The northern lights are one of the most spectacular shows on earth and can be seen from September through April on clear nights. While you don’t need to come to the north of Iceland to see the northern lights, Akureyri is especially good for northern lights viewing, due to the high mountains on both sides of the fjord. They keep the clouds away – essential for seeing the elusive lights!

What causes the northern lights?

It’s electricity that does it – and the sun. Tiny particles from electronic storms on the sun (solar wind) get trapped in the earth’s magnetic field. While rushing around in their magnetic trap, some particles escape into the earth’s atmosphere. When they hit molecules in the atmosphere, these impacts cause the molecules to glow, thus creating the auroras.

The northern lights are best described as translucent sheets or ribbons of lights, dancing across the sky. They’re most often a shade of bluish green, but sometimes tinged with pink or purple. While it’s easy to describe what they look like, the experience of witnessing the northern lights is much harder to put into words. Standing in the arctic darkness underneath the twinkling stars while the northern lights flutter above, is something everyone should get to do, at least once in their life.

How can I see them?

As the northern lights are a natural phenomenon, they’re not a reliable attraction. Sometimes they appear, sometimes they don’t. Still, there are some things you can do to increase the likelihood of seeing the lights. You need to get out of the lights of Akureyri, which overshadow the delicate lights. Also, for the lights to be visible, the night needs to be clear and cloudless, since the lights originate above cloud level. Finally, be prepared, check out the northern lights forecast at
en.vedur.is/weather/forecasts/aurora.

Taking a guided tour to see the lights is a popular option. Knowledgeable guides bring you to the best viewing spots in the beautiful landscapes surrounding Akureyri, tell you everything they know about the magical lights, and if you don’t see any lights, you usually get to go again for free.

Fun for the whole family