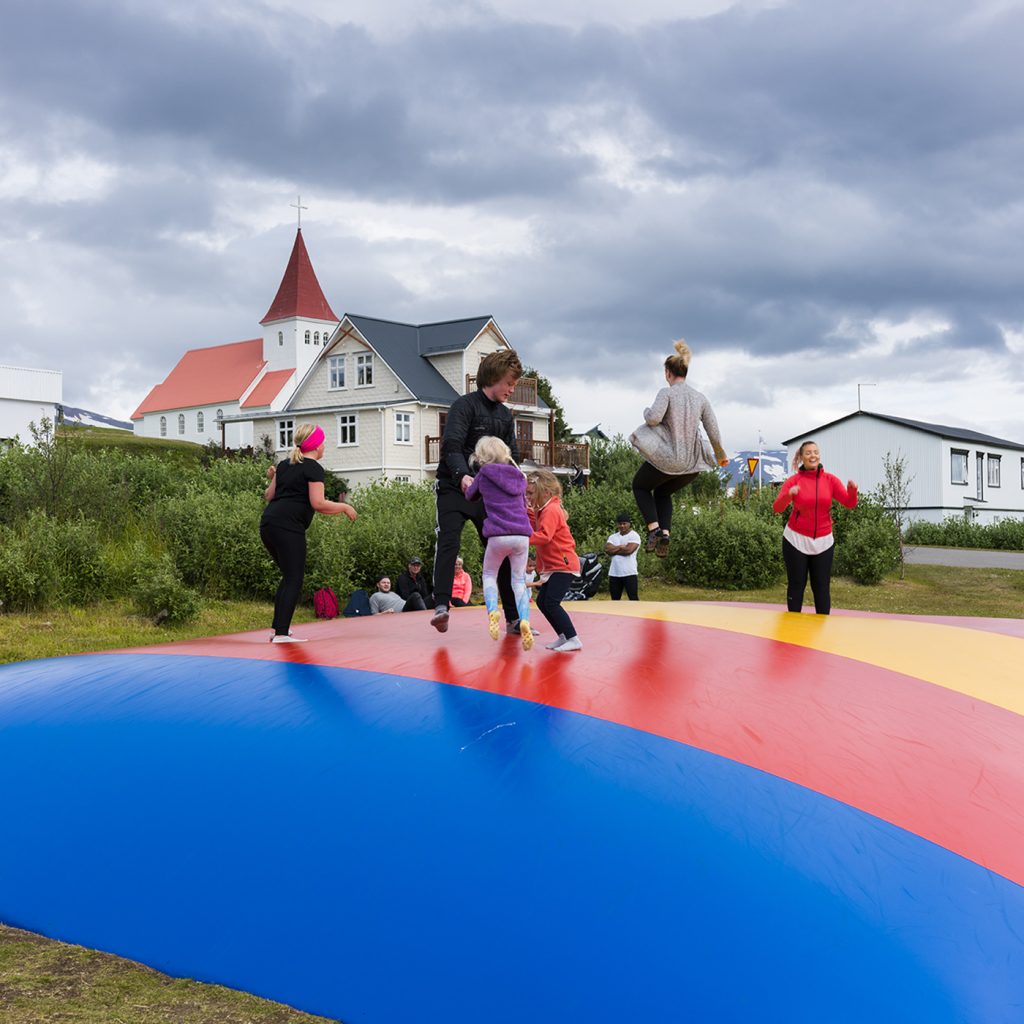 Eyjafjörður directly translates as Island Fjord. The islands in question are Hrísey and Grímsey and both of them are worth a visit!

Hrísey, the pearl of Eyjafjörður, is known for its beautiful nature, diverse birdlife, and pleasant walking paths. A good way to get to know the island is to take the ever-popular tractor-drawn sightseeing tour.

The communities and culture that develop on the islands off the coast of Iceland are fascinating. Close-knit and close to nature, surviving off the land and the sea has given the people unique opportunities as well as challenges. You can learn about the history of the people of Hrísey on the island by visiting the exhibition on shark fishing at the house of Shark Jörundur. While the adventures of the shark fishers are exciting, Hrísey also has a museum documenting a more domestic side to life. Holt, the memorial museum of Alda Halldórsdóttir showcases a typical Icelandic home in the 20th century, where the old way of life and the new meet.

Hrísey is the second largest island off the coast of Iceland and it has been continuously inhabited since the settlement of Iceland in the 9th century. It has some options for accommodation, so you can spend a night or two on the island to really immerse yourself in the culture. There’s also a restaurant if you don’t feel like cooking and a lovely swimming pool. The island’s famous for being a bird-watcher’s heaven; since there are no natural predators on the island, it’s become a bird sanctuary with 40 native species of birds, including ptarmigan, arctic tern and eider duck. The ptarmigan is particularly common there, a bird in the grouse family, impressive in its snowy white winter costume, and one of the few species with feathers on their legs.

To get to Hrísey, there’s a 15-minute ferry ride from Árskógssandur (35km from Akureyri) and the ferry goes every two hours. For more information, check out www.hrisey.is.

Grímsey is the northernmost settlement in Iceland, situated 41km north of the mainland. It’s so far north that it’s on the Arctic Circle, 66° north! An outdoor artwork celebrating the Arctic Circle was recently unveiled on the island, marking the exact spot where the Arctic Circle crosses it. It’s called Orbis and Globus and consists of a three-metre sphere, which is meant to be moved around the north end of the island with the movements of the Arctic Circle.

Despite being so far north, Grímsey’s summers are generally mild and the island has a rich vegetation. People have been living on the island for at least eight centuries and today, around 60 people live there. Up to 60 species of birds and one of the biggest puffin colonies in Iceland make Grímsey ideal for bird-watching. The comical-looking puffin, with its multi-coloured beak and jaunty walk, is a welcome sight when it arrives in the spring. Puffins are a symbol for summer on the island, since they only stay on land from mid-April to early August. If you’re interested in hiking around the island, sailing or even snorkeling with puffins, check out the selection of Grímsey tours available.

For the history enthusiast, there’s Grímsey church, built in 1867 and renovated in 1932. Grímsey lighthouse is another notable building, built in 1937. On the eastern side of the island, you can see the dramatic coastline where the islanders climb down the sheer rock cliffs with a rope, at great personal risk, to collect eggs for themselves and their families in early spring. The island also has some beautiful basalt column formations.

The island is small but it still has two guesthouses for curious travellers who want to spend some time exploring the island. There’s also a shop where you can get all your necessities as well as a restaurant, if you don’t feel like cooking on your own.

To get to Grímsey, you can take the ferry from the village of Dalvík (a 30-minutes drive from Akureyri), or take a flight from Akureyri. The ferry takes three hours and has five departures a week during summer and four during winter. For scheduled flights, consult www.grimsey.is. Sightseeing flights and tours are also available, with a stop on the island to cross the Arctic Circle before heading back to Akureyri.

Taking a refreshing boat trip is ideal for families, particularly on sunny days, but going by flight will get you there much faster.

For more information on things to do, services and transportation, go to www.grimsey.is.