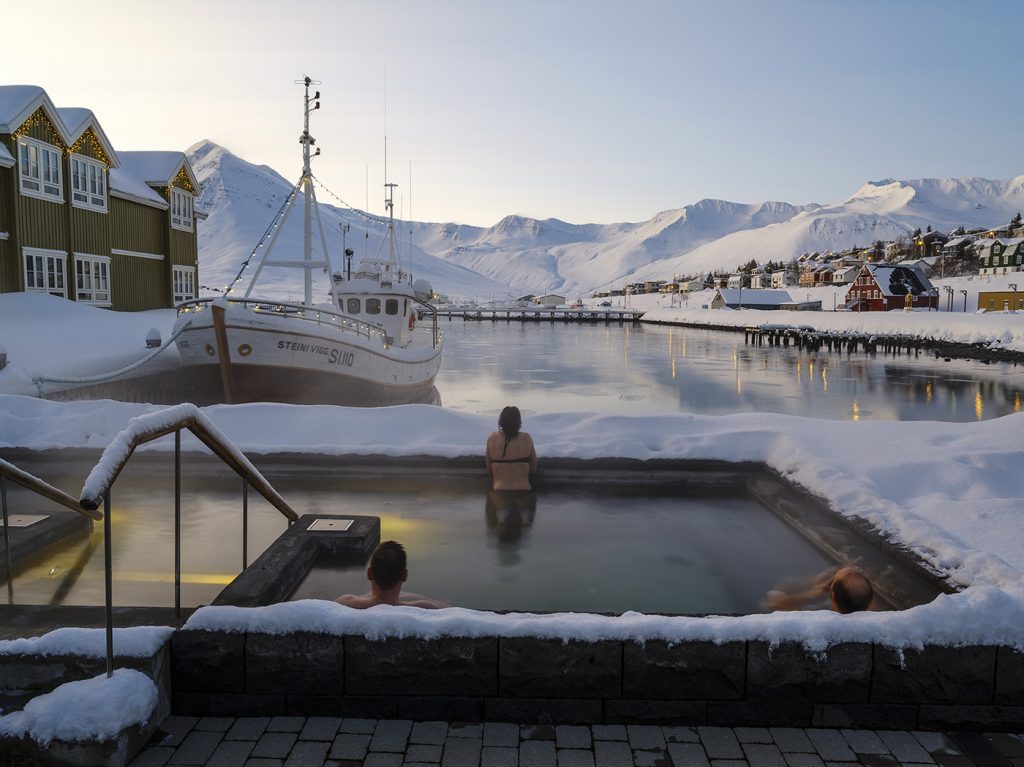 The colourfully named Tröllaskagi (Troll-Peninsula) is the area immediately west of Akureyri.

The route northwest from Akureyri takes you through Árskógssandur, where you have a chance to taste the locally-brewed Kaldi beer and take a dip in their Beer Baths Spa! You can also take the ferry to Hrísey island, a birding haven with a charming fishing village.

Further north is Dalvík, great for whale watching and home to the Hvoll Folk Museum. The museum is well worth a visit, featuring an exhibition on Jóhann the giant (2,34m) as well as a natural museum, complete with a stuffed polar bear. Here you can go horseback riding or hop on the ferry to Grímsey island, located on the Arctic Circle, also renowned for bird-watching.

Drive on through the tunnel to the charming fishing town of Ólafsfjörður. The next tunnel will take you to the stunning, uninhabited Héðinsfjörður valley. The following destination is Siglufjörður, a historic fishing town which rose to prominence during the 1950s when there was an astounding upswing in herring fishing. If you want to learn more, you can visit Síldarminjasafnið (the Herring Era Museum), an impressive museum with exhibitions in three buildings by the harbour. There’s also the Folk Music Centre, and an endless list of outdoor activities such as fishing, skiing, and hiking. Siglufjörður is also a great place to enjoy the local culture with some seafood and a beer at one of the restaurants by the harbour.

Heading southwest from Siglufjörður, down the other side of the peninsula, you will come to Hofsós, which was an important trading town in ages past. You can visit the old tarred-timber warehouse built in 1777, pay homage to the exodus of Icelanders to Canada at the Icelandic Emigration Centre, or view some impressive basalt column rock formations at the nearby black sand beach. Whatever you do, don’t miss the Hofsós swimming pool, where you bathe in hot geothermal water while looking out over the ocean and nearby mountain ranges.

You might even venture as far west as Sauðárkrókur, though it may be getting late at this point. In and around the town, you can visit the Glaumbær folk museum and a reconstructed traditional turf house, or visit the Tannery Visitor Centre. In addition, you have the option of horseback riding, bird-watching, golfing, or even a boat trip to the dramatic Drangey island, famous for its birdlife.

Finally, in the nearby Varmahlíð area, there are companies offering rafting experiences on both the east and west side of Jökulsá river. One is family friendly but the other is not for the faint of heart.

Heli-skiing is probably the most thrilling and most luxurious activity you can do in Iceland.

Taking a helicopter up to mountain peaks where humans rarely step and skiing down the untouched slopes of the magnificent mountains of the Tröllaskagi is an experience you’ll never forget. Relaxing in a hot tub after a long day of skiing underneath the northern lights or the midnight sun is the icing on the cake!