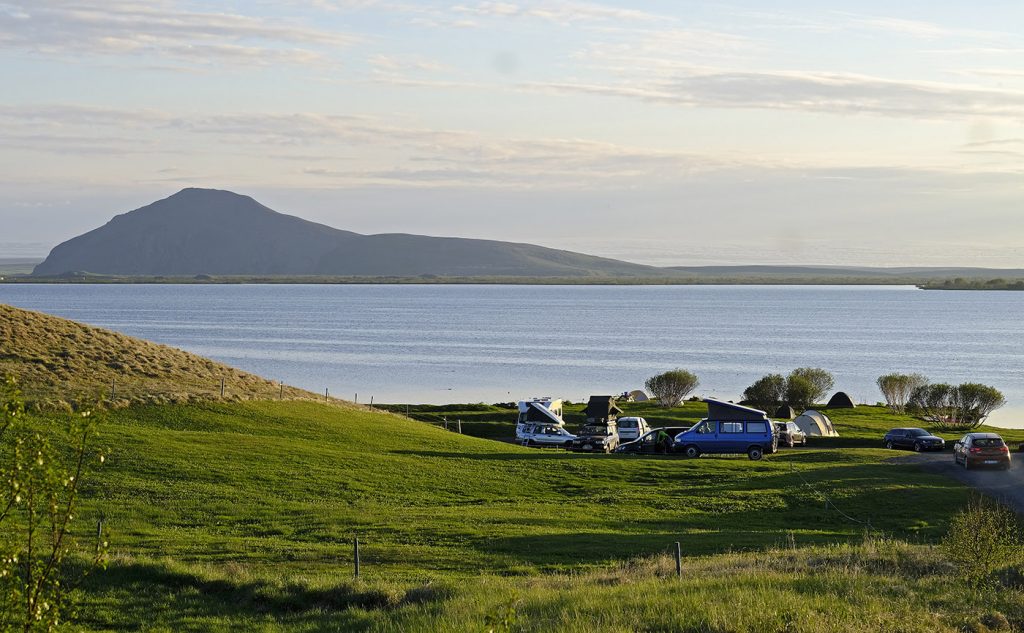 Lake Mývatn is a unique location. It’s an environmental paradise with vibrant birdlife and natural phenomena, surrounded by geothermal heat and natural wonders. There are more species of ducks at Mývatn than any other place on earth, in addition to many other migratory birds.

In the area of Lake Mývatn

On the way to Mývatn from Akureyri, stop at Goðafoss (the Waterfall of the Gods). The waterfall is not just a beautiful natural wonder, it’s also where local chieftain Þorgeir threw his carved idols after ruling that Icelanders should convert to Christianity in the year 1000 AD. From there, you can go south of Lake Mývatn until you get to the pseudocraters of Skútustaðir – a unique geological phenomenon. Stop by the bizarre lava pillars of Kálfaströnd en route to Dimmuborgir (Dark Castles), a set of lava formations that resemble an Elvish city – complete with cathedral and all. This is one of the most popular places to visit in the north of Iceland and there are marked hiking trails of varying difficulty which will lead you around the most beautiful spots in the area. In December, the area is crawling with Yula Lads, Iceland’s 13 mischievous versions of Santa Claus. All along the lake Mývatn route, you will have great opportunities for bird spotting.

Moving west from Lake Mývatn you could stop by Grjótagjá, a hot spring inside a lava cave, which was featured memorably on the hit TV series Game of Thrones. Alternatively, you could take a guided tour to the fascinating Lofthellir lava cave – it’s so deep that the temperature’s always below freezing, resulting in ice stalactites.

Many places around Mývatn are affected by the geothermal heat in the ground below. Plants don’t grow there but the ground itself takes on diverse colours and textures, in some cases even bubbling and steaming. From the lake, there’s a short drive to the geothermal area of Mt. Námafjall, with its bubbling mud cauldrons and steaming fumaroles, and the explosive crater of Víti (Hell) in the Krafla volcanic area. You can also take an hour-long hike around Leirhnjúkar, an 18th-century lava field, which is grotesquely beautiful.

If there’s still time left, you could enter the national park where glacial rivers have carved great canyons in the land. They’ve created such gems as Dettifoss, the most powerful waterfall in Europe, which was the backdrop for the epic opening scene of the movie Prometheus. If you’re feeling remarkably ambitious you could go all the way to Ásbyrgi Nature Reserve, a stunning horseshoe-shaped valley, far from civilisation, which, according to legend, derived its shape from the hoofprint of Sleipnir, the eight-footed horse of Óðinn.

Whether you make your day shorter or longer, you should end your day with a relaxing dip in the Mývatn Nature Baths – a geothermal pool with a unique mineral composition and a mountain view. The milky blue waters are reminiscent of the more famous water in the blue lagoon and the views are no less gorgeous.