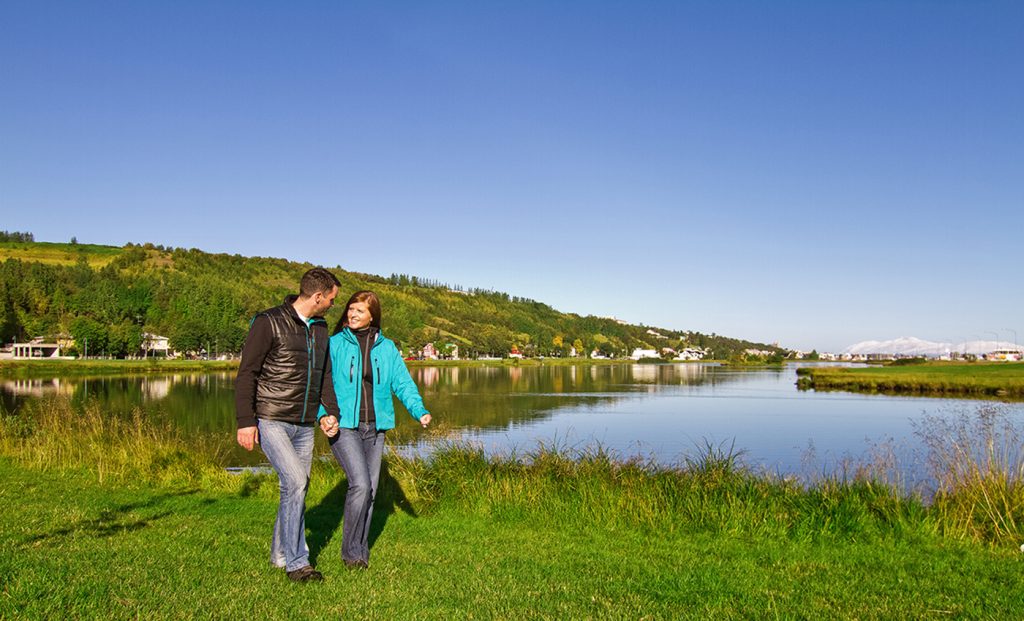 When visiting Iceland, it’s important to take the weather and the seasons into account. Iceland in the summer is a completely different beast from Iceland in the winter and Akureyri is no exception. Each season has its own charms and season-specific activities!

As spring arrives, the Botanical Garden is where you want to be when Akureyri’s flora starts bursting into life. Inhabitants of Akureyri also start blooming as many dig up their running shoes, drag out their bikes for a ride or fire up their barbecues. If you want to join in the excitement, head to the Akureyri thermal swimming pool to join the spring fever!

After a good soak in the geothermal water, a nice walk through the historic centre of town will give you a feel for the town’s history. It can still get a bit nippy in spring in Iceland, so if the weather doesn’t exactly match your sunny mood, head to Akureyri Museum and learn how this town in the north developed.

Akureyri in springtime is also an ornithologist’s paradise, with the rich variety of migratory birds returning to the area to lay their eggs. Particularly good places for bird-watching include Krossanesborgir, the estuary of the river Eyjafjarðará and the islands on the fjords, Grímsey and Hrísey. Grímsey is home to one of the biggest puffin colonies in Iceland and in Hrísey, ptarmigan and arctic terns are quite common.

Summer is the most popular season to visit Akureyri and for a good reason! The nature surrounding the town puts on a grand show and the weather is on its best behaviour.

Favourite summertime activities include golfing, visiting the Botanical Garden, dropping in at Akureyri Museum or the newly renovated Akureyri Art Museum. Nothing beats sitting outside a café on a sunny day soaking up the rays. To encounter nature at close range, hop on a boat for a whale watching tour. Feeling more active? Hike up the magnificent Mt. Súlur! In the mood for relaxing? A long soak in the thermal pool will leave you refreshed.

There are enough museums in town to quench your thirst for knowledge, such as Into the Arctic, an exhibition on the history of the arctic. If you’re up for a drive through the countryside, the area surrounding Akureyri has some terrific museums as well, such as the Herring Era Museum in Siglufjörður or the Sundry Museum in Eyjafjarðarsveit.

Akureyri is one of Iceland’s northernmost towns, only 90km south of the Arctic Circle, making it the perfect spot to experience the midnight sun. Sunglasses at night are par for the course in the weeks around the summer solstice!

Summer is also a great season to visit Akureyri as it feels like there’s always something going on. Summer celebrations include the Vaka Folk Festival, National Day, Hiking Week, Arctic Open golf tournament and Gásir Medieval Days, to name but a few.

Akureyri has a lively cultural life with an impressive yearly theatre and concerts programme. Not only does the town have the only professional theatre outside of Reykjavík, it’s also filled with concert venues big and small. You can catch everything from Iceland’s top bands playing at intimate venues like Græni Hatturinn to the North Iceland Symphony Orchestra at Hof concert hall and cultural centre.

Akureyri Cultural Night, celebrating Akureyri’s official anniversary in late August, sets the scene for the festivals of the autumn in Akureyri. Other events include A!, a performance art festival organised by the Akureyri Art Museum, featuring both young and established artists.

The Akureyri Art Museum, the Akureyri Museum and the Toy Museum all offer a great way to spend the day. If you want to learn more about the local culture, art and the artists who make it, stroll down Art Street or visit Flóra, a souvenir shop/cultural events venue/artist workshop.

Akureyri truly becomes a winter wonderland in the winter season, when the snow covers everything, and the northern lights twinkle over the Arctic Circle. Northern lights excursions are one of the most popular wintertime activities, with the season lasting from the end of August until the end of March.

For everyday pleasure, soaking in the hot tubs at the Akureyri swimming pool is great when it’s cold outside, but for excitement, activities such as snowmobiling, winter horseback riding and even dogsledding are popular options. Mt. Hlíðarfjall, arguably the best skiing and snowboarding resort in the country, is only a five-minute drive from the city centre and within the city, you can go skating at the skating rink.

Cross-country skiing and hiking in Kjarnaskógur is popular, the best time of year being from roughly November until the end of April. For those on the hunt for a slightly less conventional outing, there’s snowshoeing and heli-skiing.

For the extremely adventurous, there’s the option of arctic diving! These extreme types will not want to miss the Iceland Winter Games in March or AK Extreme in April. In addition, there is a full in-town calendar of concerts, plays and exhibitions.

Finally, being in Akureyri on New Year’s Eve is something not to be missed. Not that you can miss it if visiting, the town practically explodes with colourful fireworks!