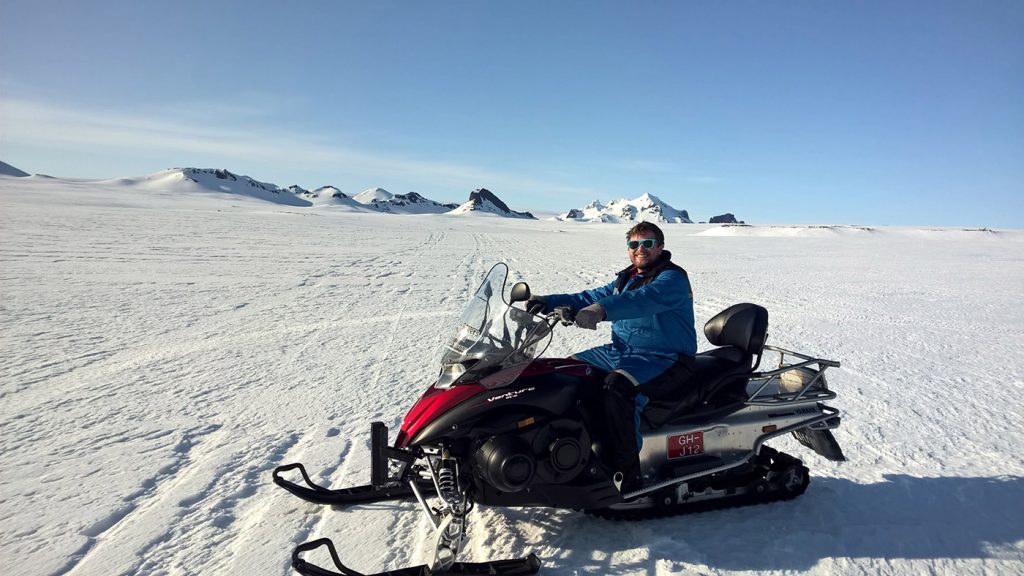 Explore Lofthellir Lava Cave, located close to Lake Mývatn – a world of unique ice formations and darkness. The cave boasts magnificent natural ice sculptures that occur naturally because of the freezing temperature at such depth. The total length of the cave is about 370m with a ceiling height of, at its highest point, about 15m. As you travel back to Lake Mývatn, you can take the opportunity to see some of the other fantastic sceneries in the same area, such as Dimmuborgir (Dark Castles), one of Iceland’s most popular natural tourist attractions.

Diving in the North

Scuba diving in Iceland is a magnificent experience and every plunge into its icy waters is different than the previous one. Iceland has a fascinating variety of marine life, such as sea snails, crabs, all kinds of fish, jellyfish, sponges and starfish. Lucky divers may see seals, and maybe even whales!

A two-hour drive from Akureyri is the first protected underwater area in Iceland, the geothermal cone Strýtan in Eyjafjörður fjord. It’s the only one of its kind that you can scuba dive to as others are only found at 3,000m or deeper. Around 100l/s of freshwater flow from the cone at 72°C.

Eyjafjörður (Fjord of Islands) one of the longest fjords of the country, is truly the place for some deep-sea fishing excitement. The fishing grounds are near the departure spots and the surroundings are majestic. Boats are well equipped for deep-sea angling and the tackle awaits you on board. The only risk is that your catch might be too much to carry home!

The steam columns from the geothermal plants at Krafla and Bjarnarflag (Mývatn) are a magnificent sight. A visit to either of the two green energy plants will give you a feeling for the power in Iceland’s nature. Your way back to town takes you past nature landmarks such as Lake Mývatn, with its unparalleled beauty, and Goðafoss, the scenic waterfall with historic connections to Iceland’s conversion to Christianity in the year 1000.

The north of Iceland is a great area to get in touch with the giants of the ocean, whales. The clean, clear waters are full of life, whales, as well as other creatures of the sea, mainly birds, with the puffin being the most sought after. Akureyri and nearby towns of Dalvík and Húsavík are all great for whale watching, especially for seeing the giant humpback whales. Other whales one could expect to see are minke whales, fin whales as well as an assortment of dolphins and porpoises.

Akureyri is very close to the best rafting rivers in Iceland. There are two, the east side of Jökulsá river and the west side of Jökuslá river, the east river generally regarded as one of the top five rafting rivers in Europe – some even claim it’s simply the best. This is an action-packed river, not for the faint of heart but sure to provide a great time. Day trips are available but also three-day expedition style trips, going straight from Hofsjökull glacier, the source of the river, running every rapid on the river. The west side of jökuslá river is an adventure suitable for families and kids as young as six years old. It has a riverside hot spring that’s used for mixing hot cocoa on the trip, so despite being less demanding than the east river, it promises enjoyable family fun.

Some of the biggest adrenaline rushes one can imagine come from the thrill of riding a snowmobile. Incredibly powerful machines, yet surprisingly easy to manoeuvre, a ride on a snowmobile (or a ski-doo if you like) is bound to be one of the highlights of your visit to the north.

You don’t need any specific experience to confidently ride, though be sure to drive carefully, as these are really powerful machines! Note: a driver’s license is needed!

The Icelandic horse is a one-of-a-kind breed. Bred in isolation on the island since the age of settlement, the horse retains many desirable qualities that horses in other parts of the world have lost, most notably, a fifth gait, known as tölt. Riding an Icelandic horse through the unspoilt nature of Eyjafjörður, just like the Vikings did, is the perfect way to explore Iceland. There’s a riding tour for everyone, short tours for beginners and longer ones for experienced riders.